WE ARE NO LONGER PERFORMING FRAXEL TREATMENTS

Fraxel has been superseded by HALO laser resurfacing, which heals faster and is more effective than Fraxel*

The medical grade Fraxel® Re:store DUAL laser is now established as the best laser to improve the texture of the skin, restore ageing skin and to reverse sun-damage.

It is also now the treatment of choice for acne scars, and unlike Intense Pulse Light (IPL), can be used on all skin types including Asian and darker skin. This laser is the most effective of the Fraxel lasers available, and is only available at medical practices.

The Fraxel Re:store DUAL laser is a laser with two different wavelengths, one specifically treating concerns such as wrinkles or acne scarring that are deeper in the skin layers (1550nm), and the other (1927nm) effectively targeting brown ‘age’ spots and tone and texture, which are more superficial.

Only one treatment with the 1927nm wavelength of the medical grade Fraxel Re:store DUAL laser will improve dark pigmented ‘age’ spots, as well as improving the skin’s tone and texture but it can take up to three treatments*.

Three to five treatments with the 1550nm wavelength of the medical grade Fraxel Re:store DUAL Laser will show a significant improvement in acne scarring, and fine lines and wrinkles, as well as improving the skin’s tone and texture*.

Fraxel® can be used for treating the face, neck, décolletage and back of the hands. Treatments are performed using a topical local anaesthetic cream applied to the skin one hour prior to treatment in the rooms. The treatment itself usually takes about 20-30 minutes, and afterwards it feels like mild sunburn.

The medical grade Fraxel® Re:store DUAL laser is now also the best treatment for a range of conditions including:

You may experience mild redness or puffiness for one to two days after the treatment, a bit like windburn when you ski. Some clients can return to routine activities, including work and social events, the same day, while some require one to two days off. Often clients have the treatment on a Friday and return to work on the Monday. You may also experience dry, itchy skin and some peeling or flaking and a bronzed skin appearance, 3 to 4 days after treatment.

With a track record of over 800,000 treatments worldwide, Fraxel® technology has a proven record of efficacy and safety. Click here to see some before-and-after photos of our Fraxel re:store Dual Laser treatment. More information can be obtained by visiting the Fraxel website. 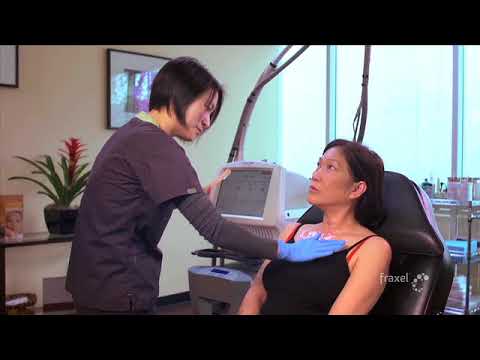 before & after – Client gallery

Please fill out the form below to get in touch with us:

I've always found the staff at Infinity to be extremely professional, friendly and with a high level of knowledge and experience. The premises are also of a high standard, with free underground car parking for easy private departure after treatments. I've had three fraxels, microdermabrasions, and a capillary treatment and have been very happy with the results.

I have been a client/patient of Infinity for some time now and have always found all of the staff to be professional,friendly and always helpful from the time you walk through the front door and until you leave. All my treatments from Melinda, Emily,Lisa have always been excellent and I find the products I am using and the advice given to me better than anything I have had in the past.. The Clinic runs very smoothly and professionally and is a credit to all.

I have had many different treatments at Infinity Skin Clinic and I am extremely happy with the results. I can highly recommend Melinda , she is very professional and gave me all the right advise . The Staff are very friendly and professional as well. The information nights are a great way to find out about all the treatments and services they have available and helped me make informed decisions.